Noise is unwanted sound; what is music to one may be noise to another.  By its very nature noise is subjective.  Noise cannot be measured, only sound can be measured.

Why does it seem louder some days rather than others?

Atmospheric conditions play a significant role in affecting the sound levels daily and how these sounds are perceived by the public.

The atmosphere can absorb sound depending on the temperature of the air and humidity levels.  Less sound will be absorbed by the atmosphere on days with high humidity and high temperatures.

Soft surfaces, such as vegetation, absorb more sound than hard surfaces like water or concrete

What kind of operations goes on at the airport?

Residents with an aircraft, hangar tenants, flight school and aircraft owners, we also are home to a helicopter maintenance facility, as well as aircraft storage.  We also offer our facilities to emergency services such as STARS to assist in any emergency located in the surrounding area.

Why are on some days every plane is taking off over my home?

Pilots generally take off into the wind for reasons of speed and lift.  At Okotoks from its single runway, there are two main departure directions for aircraft, North and South.  Pilots generally take-off and land into the wind, as it increases lift meaning they can take off earlier and climb faster.  The winds at Okotoks annually are roughly distributed favoring 50% North/ 50% South.  When winds are minimal, resident pilots will tend to depart in a northerly direction to avoid taking off over homes in the Drake Landing area.

There is a plane flying low over my house, is it allowed?

Under the Canadian Aviation regulations, an aircraft must maintain 1000ft vertically above a built-up area, or 500 ft above a person or building in non-built-up areas, except when an aircraft is in the process of landing, taking off or approaching an airfield.  Different rules apply to helicopters.

There are also exceptions in that flights can be conducted lower than these criteria if they are for surveying, matters of defence, law enforcement, etc.

Pilots are also empowered to fly lower if visibility is impaired.

Why are planes flying constantly over my house every couple of minutes?

As part of a student pilot's training, they need to spend after 5-10 hours mastering the important skill of landing and taking off.  This involves flying a circuit.  Also known as patterns in the US, circuits are primarily an aid to pilots in learning and practicing landings, as well, as forming a traffic flow for operations at an airport without a control tower.  Aircraft will take off from the runway and climb to about 400 feet above ground level, at this time they make a turn.  They then continue to climb until they are at a 1000ft at which point they turn onto the downwind stretch which would run parallel to the airfield about a mile away.  When they are about a 45-degree angle from the tip of the runway at the far end they make a turn and start to descend, followed by another turn when they are in line with the runway at about 500ft AGL.  The aircraft then complete the landing.  Aircraft from outside the area intending to land would join the circuit on the downwind stretch and follow the pattern.

Who are the student pilots and why are they training here?

The student pilots belong to both the flying school and aircraft based here. They are young people looking to find employment as pilots in careers with military or commercial airlines.  Unlike many other flying schools in Alberta and Canada who choose to service the lucrative foreign student market, the female and male students here are Albertans from Okotoks/Foothills/ Highwood/ South Calgary.  These will be the pilots flying you on your business trip to Toronto, your family vacation to Mexico, the annual visit to your grandparents on Vancouver Island, or taking part in peacekeeping missions with the RCAF.  They will also be the pilots flying medical evacuations, fighting forest fires, delivering vacationers to lakes and the peaks of mountains, and delivering supplies to remote communities.

Funding to the basic level to be able to fly people for commercial reasons can cost close to $100,000 so the closeness of Okotoks to their homes allow students to work and live in reasonable proximity to their homes, families, and jobs as they work towards their career goals.

Canada has a shortage of pilots, a fact repeated worldwide as the increase in flying caused by the reduction in average ticket prices.  The training of Canadian nationals to become pilots reduces the dependency on non-Canadians to fill the need.
The school also believes in training female pilots.  The industry has only 5% female pilots, the school currently has over 20% enrolled.
Why can’t they go to Springbank or other airports?

Springbank is effectively full.  It is part of the Calgary Airport Authority.  For many years the International Airport has priced out general aviation and flight schools.  This traffic was pushed to Springbank which is now effectively full and is facing noise issues itself as the expansion of Calgary's residential areas continues unabated.

Other, smaller airfields still may have noise concerns from residents no matter how sparsely populated; also, the circuits only have a certain amount of capacity.  Added to that it needs to be taken into account the extra fuel burn and time taken to reach other airfields.
I hear aircraft in the winter evenings and at night why are they flying?

Most pilots are qualified to conduct flights in certain weather conditions during daytime only, defined as 30 minutes before sunrise and after sunset. However, with further study pilots can receive a night rating so that they can fly during hours of darkness.

There are also flights undertaken by pilots from other airfields or aircraft undertaking survey work that may choose to fly over or visit the Okotoks area in the evenings.

Why when I am having a BBQ on a sunny weekend day, are planes flying overhead more frequently?

When it's sunny everyone heads to the mountains or the beach, pilots are no different.  Like motorcyclists, boaters, and classic car owners, pilots like to fly when the view is pristine and there are no bad weather conditions.  Also, like many working people, they have free time at weekends and evenings and use the time to take friends and family up into the sky or to undertake training.

The conditions that nobody wants to fly in, are similar to the conditions that nobody wants to drive in or be outside in.  By Canadian aviation law, student pilots and licensed pilots need minimum visibility of at least 1-3 miles, not to fly into the cloud, so low-level cloud or fog prevents this, and no thunderstorms in the vicinity.  From an aircraft operation point of view temperatures below minus 10, strong crosswinds, and hot summer days where there is little lift generally discourage flying.  The mountains can also create dangerous turbulence from lee waves that prevent many small aircraft from flying even on a clear sunny day.

They told us when we bought the home that the airport was closed, why is it operating?

A quick Google search indicates in all print media that the airport was temporarily closed.  The airport owners remained in communication with the Town and developers indicating the status of the airfield.  The airport cannot take responsibility for any incorrect information provided by third parties or their agents.

Part of the reason for the temporary closure was that at that time the airfield was unfenced.  Situations occurred where quad bikes, wildlife, and people walking their dogs were regularly trespassing on the runway creating considerable safety issues.  Money was budgeted and this concern along with correcting other findings meant that Transport Canada approved the re-opening of the airfield in May 2017.

The airport doesn’t bring me any benefits, so why is it there?

Airports are seen as important community infrastructure assets.  They are there to assist in emergencies such as air ambulance, fire fighting, and disaster support.  They provide economic benefits to the area in that visiting pilots will choose to spend money at businesses such as hotels, restaurants, rental cars, etc in the town.  Also, the airport provides employment and services whose income is spent in the community at stores, services, and contracting local support services.

And in a larger context, the training of Canadian pilots will assist in the future of the aviation industry and military in Canada.
I am concerned over the safety of aircraft, is there going to be an accident?

Whilst large aircraft accidents make the front pages, aviation is a very safe form of travel, due to its inherent safety culture. For example, aircraft operating here have to undergo regular documented maintenance as well as annual airworthiness checks.  These and just about any minor alterations have to be signed off by certified mechanics.  Also, pilots have to undergo frequent medicals as well as undertake recurrent training to maintain their skills.

Take all this into account next time you are driving on the road!

Why do they build houses under runways or aircraft circuits?

Many airfields in Canada (and all over the world) were built far from the communities they serve.  Okotoks Airfield was built in 1978 when Okotoks consisted of a few streets.  However, since that time and especially in recent years demand for housing and larger house/lot sizes has seen communities all over Alberta expand to encompass resident airfields.

The area around the airfield was initially marked for light industry but as the demand for housing outweighed industry, the land was re-zoned. Planners calculate NEF noise contours based on a 90% peak planning day using the aircraft utilized on the airfield. The noise contours carried out by an engineering company as part of the Town’s Land Use Bylaw Plan (Adopted 2009, Updated 2013) can be seen below.

Transport Canada's recommended Land Use Near Airports can be seen in the following document: 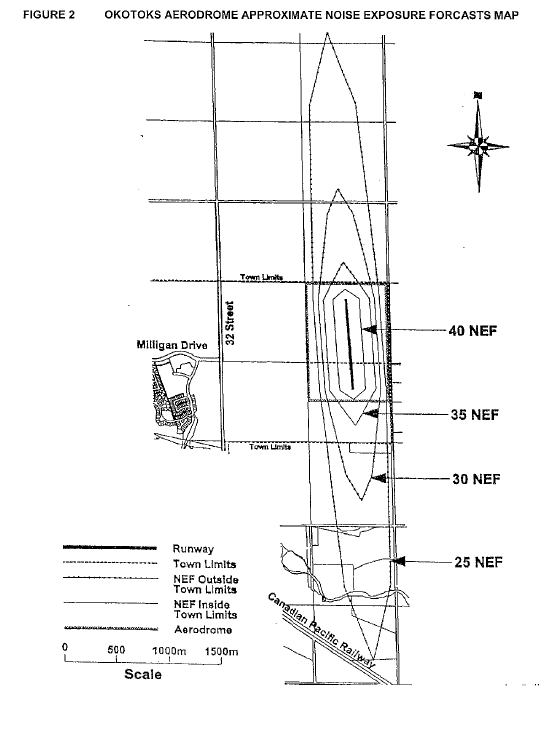